Weezer: Raditude (a review you probably won’t agree with) 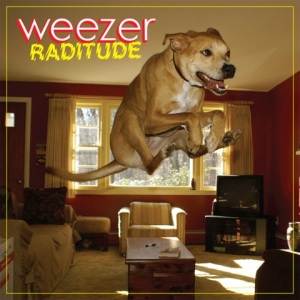 I’m a Weezer fan for the long run. Sure, I’ve pretended I wasn’t a fan quite a few times since 2000 when Weezer puts out the embarrassing song or pulls the embarrassing stunt. It sucks. But there’s been some shining moments. I love love love “Island In The Sun” from The Green Album. I think that although weird and scatterbrained, Maladroit is pretty rockin’. Make Believe was sort of tame, but there were some catchy songs. The Red Album’s had some lyrics that made me think that Rivers Cuomo was a 39 year trapped in a 13 year olds body, but listen to “The Greatest Man That Ever Lived” or “The Angel and The One” again and be amazed.

When Weezer announced that they were titling their 7th album Raditude I just about lost it. And then I found out they were putting a picture of a jumping dog on the cover. I cried a little bit. And Rivers was acting even more like a 13 year old boy. NOOOOOOOOOOOOOOOOOOOOO. WHY ME AND WHY MY BAND?

But that was before I heard any of the music…

“If You’re Wondering If I Want You To (I Want You To)” was the first single and it caught my ear. It was no “Across The Sea” from Pinkerton, but it was catchy. I got the rest of the album 2 weeks ago and while it is no Pinkerton, it is the best thing they’ve done since 2000. The songs are catchy. They’re trying new things by working with different producers and songwriters. “Can’t Stop Partying” is so far out of left field for Weezer (yes, it sounds like a lot of other hip hop type songs but…for this band this is different). “The Girl Got Hot” was made straight for radio (the smooth production gives this one away) but I’m singing along. “Put Me Back Together”, which was written with two guys from The All American Rejects, sounds like Weezer trying to do an All American Rejects song (who in turn sound like they’re trying to be Weezer), so the results are sort of mixed. “Love Is The Answer” gets a George Harrison Hindu-esque treatment, and it’s easily the most cringeworthy moment on the album.  Raditude would be better with this song left off.

My favorite part of Raditude are the “bonus tracks” found on the deluxe edition. “Get Me Some” is a pretty rad rock song with a cool guitar solo. Once again, something out of left field for Weezer. “Run Over By a Truck” and “The Prettiest Girl In The Whole Wide World” are two of my favorite Weezer songs. They’re just so cool. Yes, “Prettiest Girl” was written in 1997 and I have had a version of it since 1998, but they finally managed to capture the song in the studio perfectly.

Overall, Raditude is just a great set of catchy songs done by a band that has had really good moments and really bad moments. If you loathe the current version of Weezer, you’ll loathe this album. If you just like good pop music, you’ll love this album. I think it’s their best in a long time.

-Weezer started recording this album with producer Jacknife Lee and the tracks he produced are by far the best (Tracks 6, 9, 10 and all of the bonus tracks).  I would like to hear more from these sessions. Why didn’t they just stick with his productions as an album? Why did they have to go back and add more? This is one thing that irks me with Weezer. They can never seem to just stop recoring once they have an album’s worth of songs. They go back to the studio, change things up, and the results are mixed.

-Rivers Cuomo, I beg you. Quit acting and writing lyrics like a 13 year old boy. Yes, I know you’re trying to write catchy pop songs but it is getting creepy. I know you have it in you to write decent lyrics. You did it quite a bit in the old days and from time to time you pop up with a good set of them. PS you’re still one of my biggest heroes.