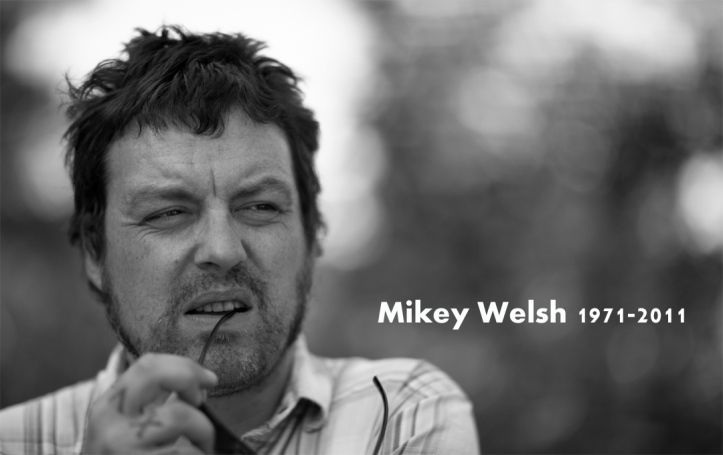 This past Sunday, I woke up to the news that Mikey Welsh, the former bassist of my favorite all time band Weezer had passed away at the age of 40.  I spent the rest of the day completely in shock, and thoughts of Mikey, life, and mortality were never far from my mind.

My story with Mikey Welsh goes back to around 1998-1999.  When I first read about Mikey and saw pictures of him, I had never seen anyone quite like him.  He had tattoos!  He looked tough!  His bass sound was all fuzzy and distorted and it really rocked!  As an 18-19 year boy, this was quite exciting.  I was always labeled as the geeky kind in my teens, and the sheer rockin’ essence of Mikey was just what I needed to roughen up my edges.

Fast forward to 1999, when I was lucky enough to host Mikey, Pat Wilson, Lee Loretta, and Karl Koch at my home for one evening while their band The Special Goodness were on tour.  I have fond memories of helping the crew unload their instruments and helping them carry them up four flights of stairs.  I remember carrying Mikey’s bass guitar case, which had WEEZER sprayed painted across it.  It was pretty awesome for an 18 year old super fan to be carrying the instruments that helped make the music that I loved so much.  Before the show started, I got to hang out with the guys.  I specifically remember Mikey working on little pieces of art that he worked on in the van while they were traveling.  I think he sold them for $5 each or something at the shows, and they always sold out quickly.  I also remember Mikey being entranced by a video game at the venue.  At one point he asked me for another quarter to play the game, which I gave him (you still owe me, dude).

When the band came back to my parents house after the show was probably the coolest music geek moment of my life.  I was getting a chance to hang out and talk music with some of my idols.  Mikey was nothing but kind and polite to my family (as were the rest of the gang).  My dad still remembers him as “the nice one with all the tattoos”.  For some reason or other, we had MTV on (as seen in the picture above) and I remember Mikey’s comment about the band whose video was on at the time (Stone Temple Pilots).  He said something along the lines of  “yeah, that’s how hard I wanna rock” which makes me crack up.

After this experience, I didn’t keep much in touch with Mikey other than seeing him backstage at a few shows in 2000/2001.  He was always kind to me and remembered staying at my parents house in 1999.  I recently got back in touch with him about a month ago through Facebook and Twitter, where Mikey was posting his stories and talking with his fans.  It just so happened to line up with a trip I was taking to Burlington in early October.  I had hoped to possibly meet up with Mikey, but he had already planned his vacation to see Weezer at RiotFest in Chicago a week later. 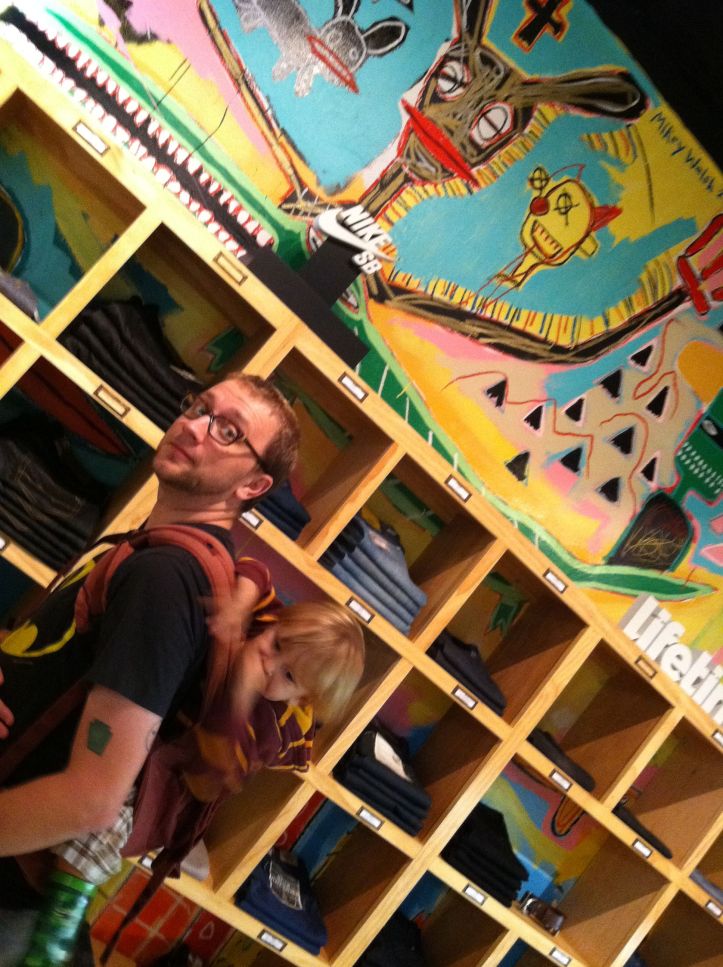 I didn’t get to see Mikey, but I got to see his artwork and I was very impressed.  My wife Haley, our son Finn, and I stopped by the store Maven where Mikey created this awesome piece of artwork you see in the picture above.  I tweeted the pic at him and he thanked me for stopping by to look at it.  That was the last time I spoke to Mikey.

It always hurts to see people go before their time, especially someone super talented like Mikey.  He was a hero to me and I can’t imagine my adolescence without his influence.  He taught me to rock harder no matter what I do.  He taught me that fuzzed out bass is a delight to listen to AT ANY TIME OF DAY.  Thanks for the music, the art, and the kindness Mikey.  You will always be remembered as a great person.

I leave you with a track Mikey co-wrote for the Juliana Hatfield album Total System Failure.  If you haven’t listened to Mikey’s contributions to this album yet, I suggest you do.  They’ll give you the perfect idea of just how amazing his bass playing was.