Prozac Is The Dam & I Am The Dynamite 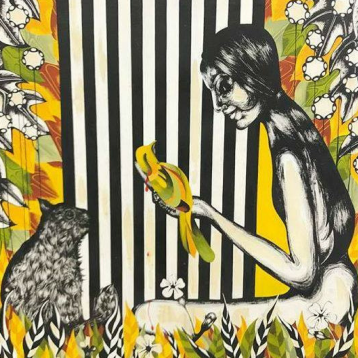 “THIS SUMMER WAS WEIRD” -Justin Hoenke

Six months after the release of the album “Either Way I’m Fine”, the musical project known as Abigail Foster’s Photosynthesis Machine is back with another album titled “Prozac Is The Dam And I Am The Dynamite”. Quickly written and recorded in the Summer of 2017, this eight song album is a trip through Justin Hoenke’s three months of removing Prozac from his body and his adjustment to the world.

“After being on Prozac for eight years, I decided that I no longer wanted to live in a muted state. Everything felt stagnant. I could easily exist on Prozac, but I felt like since this was my one chance at life that I wanted to do it properly. I wanted to feel things, both the good and the bad, again”

The journey on “Prozac Is The Dam And I Am The Dynamite” is raw and honest. “These songs had to be written and recorded. They could not sit around. If I didn’t capture the songs in the moment, the things I was feeling and going through during this process would not be honest. I wanted the album to be honest. I felt like a confused mess for most of this album, and that came out in the songs. Prozac Is The Dam refers to the medicine holding back creativity and true feelings. I Am The Dynamite because I was the only thing that could change the course I was set on. I had to make a decision to sail away from the Prozac and onto different things. I had to steer my own ship towards what I thought was honest.”

Fans of raw, honest, and homemade pop rock will appreciate this album. The album zig zags through a number of sounds and ideas. “The first half of the album is rough. I would totally understand if someone listening to it just couldn’t make it can make it through the first five tracks. But if you can, I think it makes the second half of the album even better. You’ve gotta go through the shit to get to sunshine.”

Prozac Is The Dam And I Am The Dynamite will be available on October 24 2017 through Arbacarba Records. The album will sell for $7 through the Abigail Foster’s Photosynthesis Bandcamp page

This album was recorded inside and outside on the grounds of Fidelia Hall in Titusville, PA. All songs and music written, produced, and recorded by Justin Hoenke.