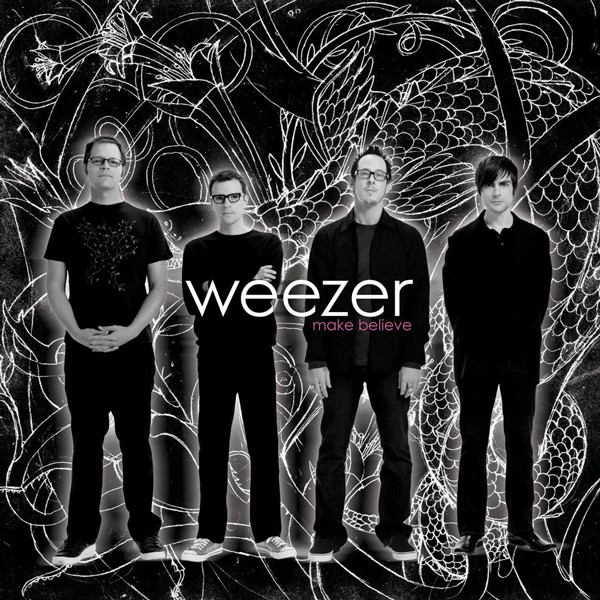 After the one-two punch of The Green Album (2001) and Maladroit (2002), Weezer fans were expecting another album to come quickly in 2003. Up to that point, the band had been on fire with new songs and music. The second part of their career was off to a great start. However, fans would have to wait three years for Make Believe, the fifth Weezer album. Upon its release, the album was met with criticism, the most notable being from Pitchfork. That review seems to have shaped a lot of the public perception about the album, but twelve years later upon listening to the album again I am finding it to be a lot different than I thought.

Arrangement: A standard pop song with a great structure and flow.

Production: The entire Make Believe sound is clean, but at the same time it is a welcome sound. There’s nothing here too jarring and everything is pretty pleasant.

Performance: They sound like a band, and any time Weezer sounds like a band it is a good thing.

Songwriting: A true pop gem, it has a strong wordless chorus, great verses, and a really wonderful bridge.

Arrangement: It starts with a guitar solo! How great is that?

Production: Very standard rock band stuff, but at the same time this feels like what Weezer 2.0 should sound like.

Performance: The band performs the hell out of this one.

THIS IS SUCH A PITY

Songwriting: Some lyrics make you scratch your head, but the overall product is good. When the chorus kicks in you don’t care. You just really enjoy it.

Arrangement: Some great parts played by the band here. I especially like the guitars.

Production: This doesn’t really sound like the Weezer that at this point knew of, but the expansion of their sound on this one is welcome.

Performance: Great overall performance by the band. A steady gallop with some great playing.

Songwriting: Almost like a lullaby, this song can really catch your ear. The chorus is triumphant, but to me those verses are the things that grab me every time.

Arrangement: Great bass lines from Scott Shriner really move this song along. This is some of his best playing in Weezer.

Production: The production lets the song breathe and the melody soar.

Performance: Another great performance by the band, specially Scott.

Songwriting: A very simple song, but the music really lets the emotional message of the song speak out. Great chorus and wordless second chorus.

Arrangement: The simple addition of the acoustic guitar really moves the song along. It wouldn’t be as great if it wasn’t for that.

Production: Basic and laid back to let the emotions in the song power everything.

Performance: It amazes me, listening to this 12 years after it was released, how fresh this feels. The performance of the band keeps it this way.

WE ARE ALL ON DRUGS

Songwriting: A pretty great intro followed by boring verses and an even more cringeworthy chorus. Does Rivers have to put one song on each of these new albums that is just really, really not that good?

Arrangement: The song does rock, but that doesn’t really make up for the fact that it is terrible.

Performance: Pat is a fantastic drummer!

THE DAMAGE IN YOUR HEART

Songwriting: This is a perfect example of Rivers at his Make Believe era best. Songs that are emotional yet restrained. It’s almost like he took up meditation or something (he did).

Arrangement: A wonderful and simple arrangement lets the emotions of the song out.

Production: The guitars are simple and beautiful. The addition of what sounds like some strings in the background really help the song move along.

Performance: Like all good Weezer songs, you can tell when the band enjoys the song because they play it really well.

Songwriting: The intro builds something up but….it just never really comes through. You hear Rivers really laying it all on the line emotionally here but something just feels off.

Arrangement: The piano driven verses are pretty wonderful. The chorus, which is meant to be big and loud, just kind of lets the listener down.

Production: The chorus could have used something else. It just feels flat.

Performance: I don’t feel much from this one.

Songwriting: “The Rocker” songs from Green and Maladroit fell flat, and here we are with the second rocker on this album. Guess what? It falls flat too.

Arrangement: It is like they are zipping through the song and repeating the structure over and over again.

Production: I read somewhere that this one was going be on a soundtrack for one of the Shrek films. This production sounds like it.

Performance: Weezer, you can do better with rock songs.

Songwriting: This kind of songwriting marries Pinkerton era raw lyrics with Weezer 2.0 songwriting experiment  lyrics and structure. I like this!

Arrangement: Every instrument and part feels perfectly performed and where it needs to be.

Production: Once again, the acoustic guitar comes along to really move the song along. Great addition.

Performance: The band enjoying a great song. Is that a saxophone I hear in the solo section? I hope so.

Songwriting: The lyrics might be a bit strange, but the song is just really well written and, combined with a great production, it makes it a song that you can’t forget.

Arrangement: Amazing. Every move made in this song serves the song.

Production: The harmonic guitars are perfect, the drums are simple and amazing, and Scott lays the bass end down. Perfect.

HAUNT YOU EVERY DAY

Songwriting: I read somewhere that Rick Rubin instructed Rivers to write a song on piano and this came out, and that when Rick Rubin did this same thing with Tom Petty the song that came out of that was “It’s Good To Be King”.  This must be a great exercise for songwriters.

Arrangement: The outro does go on a bit too long, but the rest of the song is great. The lead up to the second chorus is a great moment on the album.

Make Believe did not deserve the negative reviews it got back in 2005. This album has at least 7 really good songs on it, two that could go either way, and two duds. That’s not bad at all. I think people were mostly shocked to hear “Beverly Hills” and that they were just waiting for something that was like that song so they could tear Weezer 2.0 apart. Sadly, Make Believe was the album where that happened, but it did not deserve it. Give it another listen with some fresh ears. It’s actually really good.