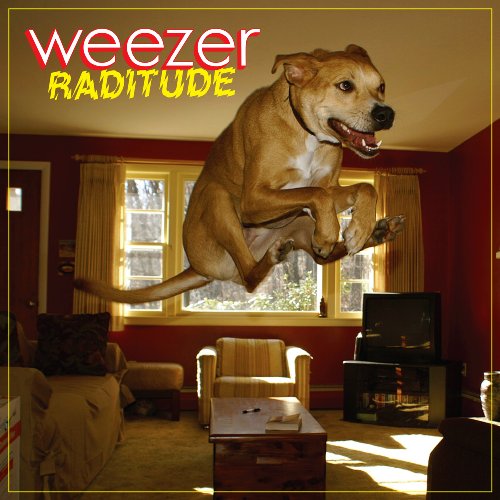 This is the moment where, as a long time Weezer fan, I started to back away from my undying devotion to Rivers Cuomo and his songs. Rivers made some questionable choices on this album: leaving certain songs off the album (a trend that started with The Red Album), stopping work with producer Jacknife Lee, and more or less putting an album together that is really just a hodgepodge of ideas. I find myself wishing I could hear more of the recording sessions with Jacknife Lee (and you can if you get the bonus edition of the album) and wishing that someone stepped in here to help Rivers craft a really good Weezer album and also a really interesting solo album.

Songwriting: A great pop song, but at the same time I don’t know if it is really a song Weezer should have done. Would’ve been great on a Rivers Cuomo solo album.

Production: The acoustic guitar rings out in this song

Performance: A wonderful bass line by Scott and a galloping drum beat by Pat.

Songwriting: At this point, Rivers was 39 years old when he wrote this song. I’m 37 at the moment of this writing and I’m just gonna go on record and say that writing a song called “I’m Your Daddy” in your 30’s should just be illegal. If you can look past the lyrics, the bridge is pretty good.

Production: I really appreciate the guitar sound in the verses.

Performance: Rivers and who? I don’t hear a lot of Weezer on this track. Feels like Rivers and a band of people.

THE GIRL GOT HOT

Songwriting: A good boot stompin’ pop rock song. I feel like you can never go wrong with a groove like this.

Performance: A great performance on this one.

Songwriting: I guess it’s an ok song, but it just doesn’t feel like a song Weezer should be doing. At this point in Rivers’ career, I’m thinking he should’ve started up a solo project for songs like this.

Arrangement: I mean I guess it’s fine. I don’t know. At this point this new direction is just tiring me out.

Production: It sounds like something that should be on the radio.

Performance: It works, but it doesn’t move me.

PUT ME BACK TOGETHER

Songwriting: A tired attempt at a pop rock song. Sure, it has you singing along but the minute it is over it is out of your head

Arrangement: More basic stuff, and at this point it is really just very tiring.

Production: Designed to make you tap your feet and hum the melody.

Performance: The band goes through the motions on this one.

TRIPPIN’ DOWN THE FREEWAY

Songwriting: Bizarre lyrics, a great melody, and a killer chorus. Rivers does pop rock right on this one. I wish he would’ve done more like this.

Arrangement: Basic stuff once again, but you don’t notice how basic it is because the song is so good.

Production: Great little touches from the background vocals really give this song a personality.

Performance: You can hear the band being excited about this one and that is what you want.

LOVE IS THE ANSWER

Songwriting: A really wonderful pop song at the core. Great verses and chorus.

Production: The production takes this song down a notch. There’s so much going on in this version of the song that it is distracting. And forgive me for saying this, but it just isn’t a Weezer production. Other versions of this song are much better. For starters, hunt down the (gasp!) Sugar Ray version of this song. It is, in my opinion, the definitive version.

Performance: Rivers and some studio musicians. Not Weezer.

LET IT ALL HANG OUT

Songwriting: In one ear and out the other. Designed to hook you but it never does.

Arrangement: So basic that it hurts.

Production: Why does this song sound louder than the rest of the album? It just make me want to skip it even more.

Songwriting: A song by Patrick Wilson. Not one of his best, but compared to some other songs on this album it stands out.

Arrangement: The middle bridge/breakdown section is interesting but overall is lacking something.

Production: It emphasizes the rock, and that seems to be Pat’s thing.

Performance: The band seems to be into it more than most of the songs on this album.

I DON’T WANT TO LET YOU GO

Songwriting: A great song that marries classic the 50’s pop sound with some Weezer touches. The song feels good to listen to.

Arrangement: Very basic, but it is good for this song as it allows that brilliant melody to shine.

Production: Sometimes I wonder if it is too much, but for some reason it works for the song.

Performance: Feels a bit like Rivers and the occasional flourish from a band member.

Raditude is a really weird moment. I think there should’ve been a split in the band at this point. Rivers should have given part of his energy to putting together really good Weezer albums here and there and then given the other part of his energy to writing pop songs with others that would either be recorded by other artists or put on a Rivers Cuomo solo album. Raditude changed Weezer forever and probably not for the better. I hear less of the band on this album and to me that’s not a great thing.