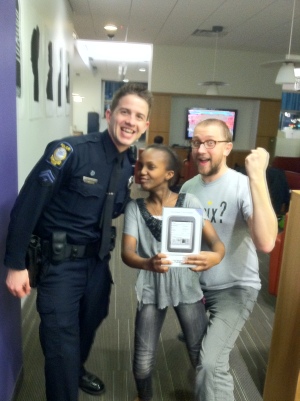 On Friday February 10, we kept the library open till MIDNIGHT for 18 lucky teens. This is their story….

Ruby said it’s all about building future relationships with the young people. During his tenure as head of Youth Services he worked toward establishing good rapport with city youth, formulating different methods of interaction with them, with the goal of creating more trust and understanding between young people and police.

He started a soccer league and worked out a partnership with the Portland Public Library to have an evening called Teen After Hours. This is a monthly collaborative program when the library remains open after normal hours, for teens only.

He also has served as a Big Brother and was described by his department’s new chief as “an exceptional mentor and role model.”

He engaged other officers to accompany him to Longcreek Correctional Institute once a month to establish regular contact with some of the young people being held there. This has been ongoing for a year and a half.